The local paper asked for our thoughts on 9/11. I submitted this to the paper but it didn't run.... :(... but that's okay... was very interesting the people's memories that they did pic. (grumble)


The TV was on, the plane was headed for the second tower.... The first tower was a blaze....our world as we know it died that day.

I ran into the other room and woke up my husband. "I said something bad has happened, come and watch"... We couldn't believe what we were seeing on live television. The images were just awful.  It was horrific to see people jumping to their death. We kept asking each other. "What the hell is going on"? ... No one knew. It was truly crippling. It seemed so unreal. Like it wasn't true. We sat and watched as the anchors tried to make sense of what everyone was watching. Then we found out there were plane crashes in other places in the East. For 3 days we sat glued to that television. It was hard to leave it. We needed to see what was happening and why. Seeing the President go to ground Zero truly helped many people to have some kind of hope for that moment.

I remember how this country banded together like we had no issue's. We were all Americans and loved this country... The Flag of the United States flew every where you looked. It was about all the people that died, all the first responders rescuing survivors and looking for the dead. All the people that sifted through all that destruction, looking for memories of people and evidence of the people that had wronged so many that day.  At first the death toll was thought to be in the 10,000 range, just in the towers. But for some reason on that day the public count was lessened. The rumors were flying around the country like crazy. Whom had done this to all these people, to the country of the USA?  It was so sad for so many souls to be lost that day. Also so many current souls are being lost today due to illnesses from the toxins that poisoned the rescue workers. We lose souls every single day in our armed forces and contracted people fighting for the American Freedom.  May all who fell, all the ordinary heroes of that day rest in peace. I hope and pray our country rallies as one before there is no more USA and freedoms so taken for granted are lost. I really don't see an end to these wars...it is like man can not, not fight... it has gone on for centuries.

Thank you for listening 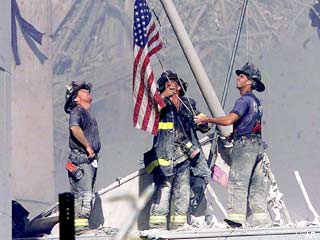 I remember that day only too well. Dick was yelling at the TV for them to CLOSE THE DAMN AIRPORTS!!! We knew both tower attacks were deliberate. Sooo many lives lost. Sad.